On Saturday 5th of May, the Oxford and Cambridge Club was transformed into a venue to rival the Oscars.  The sweeping staircase up to the reception was as glamorous as the feet that trod them.  The International Media Awards, held under the auspices of the International Council for Press and Broadcasting, is a celebration of the best in journalism in the Middle East and South Asia.  This year, the Eighth year of the Awards, is especially poignant.  The Middle East has long been a centre of world affairs, and the events of the Arab Spring, or, as one award winner described it, ‘the Arab Awakening’, have further focused the long arm of the lens on the region.  As a consequence, many of this year’s nominees and winners were those journalists, broadcasters and bloggers who reported on those momentous events that many of us watched from the comfort of our couches.
The host for the evening was Lord Stone of Blackheath, a trustee of the Next Century Foundation.  The President of the International Council for Press and Broadcasting, Dalia Salaam Rishani, delivered a moving and personal speech of her reactions to the Arab Spring before introducing an In Memoriam film in tribute to journalists who have fallen in the region over the past year.

The Award winners were as follows: 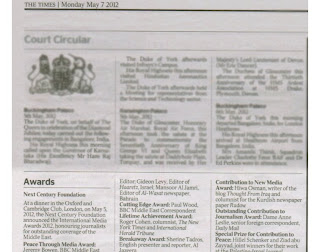 Apart from to recognise the work of these excellent journalists, the purpose of the International Media Awards is to bring together media professionals from around the world who have a special interest in the region of the Middle East and South Asia.  It is not often that such an occasion arises, and the Oxford and Cambridge Club banquet room was packed with a diverse crowd of the talented and the expert, both old familiar faces and fresh new ones, creating an exciting atmosphere of shared interests though often differing points of view.
Posted by IELM at 1:46 pm

very good presentation, thanks for sharing

INDEX OF FREEDOM FROM PRESS INTIMIDATION: Please indicate the countries with which you have concerns with regard to the intimidation of journalists. Particulary in respect of arrest, assasination and denial of access to sources of information.

JOIN THE NEXT CENTURY FOUNDATION